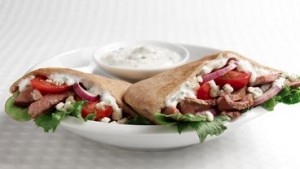 The Earl of Sandwich had no idea the versatile food trend he began with the first sandwich in the 18th century. Sandwiches are usually served at our house when we don’t have time to sit around the table and enjoy a meal or when I’m just too busy to cook (my favorite excuse!). Hamburgers are known to be the all-American favorite sandwich!

Since November 3rd is declared National Sandwich Day, I’m planning to try a new sandwich recipe that I found at Dairy Makes Sense.

Preparation:
Spoon yogurt into medium bowl and stir in garlic,parsley,chive and oregano until well blended. Set aside.
Rub both sides of steaki with salt and pepper. Heat medium,non-stick skillet over medium heat. Cook steak about 6 minutes on each side (for medium) or until desired. Allow steak to rest 5 minutes befor cutting into thin slices.
Warm pita halves in toaster. Into each pita half, spoon 1/4 of the yogurt dressing,mixed salad greens,Blue cheese,onion,steak and tomato. Spoon additional yogurt dressing over top.
Serves: 4

Have you ever had Girl Scout Campfire Stew?  We actually made this recipe on one of our first  Troop 150 camping trips. It’s easy to make in the kitchen  and a perfect recipe when you need something easy,quick and nutritious on a cold winter night!  Add a pan of cornbread,Girl Scout Cookies for dessert and a big tall glass of milk and it’s perfect!

1 onion,peeled and cut into small squares

Brown ground beef and onion ; drain. Add salt and pepper to beef and separate into little pieces or make little balls of it. Pour off excess fat. Add vegetable soup and enough water to prevent sticking. Cover and cook slowly  until meat is cooked through.  Serve hot. Serves 8.

Grilling is  considered a seasonal way of cooking for many folks but we enjoy grilling year round except for when the snow is blowing!  We’re offering a special price for beef patties and steak until Thanksgiving or we sell out. You can purchase a package of 6 beef patties (1/3lb per patty)  for $5 and your choice of rib or t-bone steak for $10 per pound.  If you have questions or need more information, you can reach us at crazya@centurytel.net or  call 479-795-2147.

In the meantime–GO  HOGS GO!!

Even though we’ll be working on the dairy and beef farm as usual this Labor Day  weekend, I do look forward to preparing easy but delicous meals for the family.  I find that a good hamburger is hard to beat and of course Anglin Beef is the perfect choice for a tasty burger.  A few weeks ago I was craving the sweet taste of pineapple and decided to try the recipe I found on the Kraft Foods website.  I basically grilled a hamburger and just a couple of minutes before I took the burgers off , I placed a ring of pineapple on the grill for just long enough to heat it (probably 1-2 minutes).  I then dressed the burgers with cheese,lettuce and the pineapple ring.  We have a divided family when it comes to using mustard or Miracle Whip, so every one chose their favorite.  It was very good and met my need for the pineapple taste!  You may want to try the recipe for Hawaiian Luau Cheeseburger posted under the recipe section.

I hope you enjoy this holiday weekend with your family or friends.  I’m going to labor less with a Hawaiian Luau Cheeseburger!

What do warmer weather,Mother’s Day and Memorial Day have in common? Great opportunities for enjoying beef! To celebrate the beginning of grilling season, Anglin Beef is offering a special price for ground beef and roasts for the month of May. You can purchase ground beef for $3.25/lb,chuck roast for $4/lb or Rump/Pikes Peak roast for $5/lb.
We look forward to hearing from you! 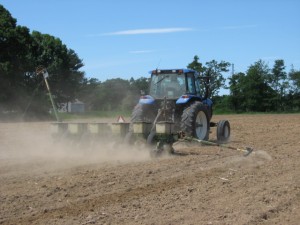 Beginning late this afternoon we have received much needed rain to fill our ponds and replenish the moisture in the soil for our soon to be planted hay and corn crops. While God supplies the rain and sunshine, farmers work hard every day to protect the land and preserve our natural resources for future generations.
One of the ways we protect the earth on the farm is to utilize animal manure from the dairy to fertilize pastures and croplands. This recycling adds organic material to the soil which increases the water holding capacity of the soil. An additional benefit of utilizing this manure rich nutrient is that less commercial fertilizer will need to be purchased. A perfect example of recycling right on the farm! Manure management is done by utilizing a farm plan designed by engineers from our local Conservation Office that directs us in the proper amount and application amounts for each field. Soil samples are taken yearly to make sure that the soil gets just the right amount of nutrients.

Earth Day brings recognition of how we must all take care of our environment. Our country’s abundance of food is due to the committment of America’s farmers and ranchers who celebrate Earth Day everyday by caring for the land. Happy Earth Day!

Have you tried the Borden Singles Sensations cheese slices? If you are wanting to add a new twist to your cheeseburger, you may want to try one of the six varieties available. This past week while attending the Dairy Farmers of America annual business meeting in Kansas City, I sampled the two newest varieties-3 Cheese Italiano and Extra Sharp Cheddar. At home, I have also tried the other varieties–Hickory Smoked Swiss,Bacon Cheddar,Pepperjack, and Chipotle Cheddar. I have liked all the flavors and find it is an easy way to add a new twist to one of my family’s Anglin Beef favorites! If you are eating Borden Cheese and eating beef you are supporting dairy and beef farm families just like us! We appreciate you!

Yesterday at the Arkansas Farm Bureau Women’s Conference in Little Rock, Donette Stump from the Arkansas Beef Council presented a beef workshop. She gave us great ideas to present to children and adults about beef. If you are needing an activity for a classroom or 4-H club, you can make snack packs using foods from the food groups and teach about nutrition and beef at the same time. Ingredients we put in each bag were: cheerios,goldkist fish crackers,gummy bears and beef jerkey. You can be creative and make up your own ingredient list. Donette did admit she forgot the M & M’s–not sure what food group those belong to but all the ladies said we would just make one for chocolate!
Here’s the rub!
SPICY THREE-PEPPER RUB
4 tsp dried Oregano
4 tsp sweet paprika
4 tsp dried thyme leaves
2 tsp garlic powder
2 tsp onion powder
2 tsp ground black pepper
2 tsp ground white pepper
1 tsp ground red pepper

Combine all ingredients. Use on steaks,burgers,and roasts.

Last week we had a customer ask Ryan about how to cook a roast. I was surprised to be asked how to cook a roast because I really never thought about the fact of how I had learned to cook a roast. When I was growing up, my Dad cooked roast,potatoes and carrots for Sunday lunch every Sunday. I never asked but I assumed we had this every Sunday because it could cook while we were gone to church. My Dad would add peeled whole potatoes,carrots,onion, and a wedge of cabbage to the roast with salt and pepper to taste. I always thought it tasted great! I do not claim to be an expert and I’m sure there is more than one way to cook a roast. I start by pouring a small amount of cooking oil in a large pot,heat the oil on the stove top and brown the roast on both sides. I usually add a little salt and pepper to the meat. Once the meat is browned, I add 1/2 to 1 cup of water, depending on the size of the roast. I put the lid on the pan, set the oven for 350 degrees and allow 2-3 hours for cooking. Cooking time will vary depending on the size and thickness of the roast. You can learn from the experts and find alot of information at http://www.beefitswhatsfordinner.com. Hope you find this information helpful!

Ryan and I were privileged to attend the American Farm Bureau Convention in Atlanta January 8-12. We enjoyed everything except the ice storm! Ryan came home with a bag full of goodies from the trade show. As I was sorting through the treasures, I found this recipe card from the Beef Check-Off booth. It sounds good and looks pretty simple, so I thought I would share it with you. I plan to try it this week.

Instructions:
1. Combine sweet potatoes,onion and taco seasoning in large skillet over meduium heat. Add water. Cover and cook 8-10 minutes or until crisp-tender and water has almost evaporated,stirring once. Stir in oil; continue cooking,uncovered,4-6 minutes or until potatoes are tender and begin to brown,stirring occasionally.
2. Meanwhile,combine sour cream and hot sauce in small bowl. Set aside.

3. Add beef to potato mixture. Continue to cook 5 minutes or until beef is heated through, stirring occasionally,adding 1 to 2 tablespoons water, if needed to avoid sticking.

Cook’s Tip: 1-1/2 teaspoons each cumin and chili powder may be substituted for taco seasoning.